Jeff has a system and a set of rules. I’ve said it before and I’ll say it again, the dirty little secret in the Sales Coaching profession is that every system works a certain percentage of the time. The trick to being successful in our industry isn’t the system you use, it’s finding the right system for you and then sticking to it. I’ve seen horrible systems work. The only systems that don’t work at all are the ones you don’t use. 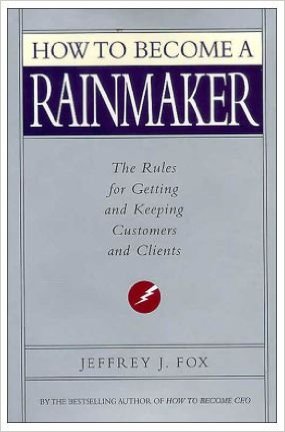 52 Weeks of Book Reviews. Week #25 – How to Become a Rainmaker: The Rules for Getting and Keeping Customers and Clients by Jeffrey J. Fox

I like Jeff Fox’s system, it’s cut and dry but he still allows for some flexibility. I get the feeling that almost all of his clients and his experience revolves around business to business sales, which is fine but it makes it a little tougher for the car, insurance, mortgage, realtor, and call center type sales people to adapt to. Jeff’s whole system is focused on business first. Don’t drink coffee or make much small talk because the customer’s time is valuable and it’s time to get down to business. There approach works for a large part of the population and since he’s referencing mostly business relationships and many Rainmaker’s in the B2B world are speaking to higher level executives it makes sense for his system to recommend that you honor their appointment book.

I don’t personally work in that world. I’ve been interacting directly with consumers for almost 2 decades with a short period of about 2 years where I sold directly to car dealerships. Consumer Direct selling is a little different because there are still many many people who will not buy from someone that they don’t like just a little bit more than an acquaintance. Many people think that they will get a good deal from someone that they feel friendly with. Friends give Friends good deals. Many people need to hear that you would recommend the exact same product or service to someone in your own family. That type of interaction doesn’t come up in a B2B world because you are selling widgets and in large part economics come into play. The purchaser in a large company needs to justify the purchase but ultimately it’s just one of many many purchases and decisions that have to be made that day, it’s very impersonal a lot of the time.

I took a ton of notes with this book, don’t think that I didn’t appreciate Jeff’s point of view and knowledge to be shared. The best part about Jeff’s book is his attention to details. Pick the right seat in the restaurant. Be a boy scout and be prepared for anything and everything, it will happen to you eventually and you’ll be glad you read this book and were prepared.