I’m a sucker for anything involving the San Francisco 49ers. I have several coffee mugs, too many t-shirts to count, my favorite sweatshirt, old game memorabilia and now I’m adding to the list with a copy of this book. Never before has my personal fandom for the 49ers crossed paths with my professional aspirations, luckily it is a happy collision of worlds. 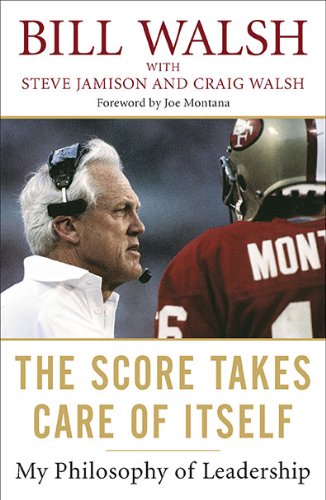 52 Weeks of Book Reviews. Week # 17 – The Score Takes Care of Itself: My Philosophy of Leadership by Bill Walsh, Steve Jamison, & Craig Walsh

I grew up a fan of the NFL. I remember watching the games from a very early age, the late 70’s and the early 80’s were full of Cowboys, Raiders and 49ers doing battle weekly on the gridiron. I grew up in the bay area of Northern California and it was a great time to be a 49er fan. We would meet weekly on Sunday for BBQ and NFL. More often than not in those days, the 49ers would come away with a victory. I would see Coach Bill Walsh on TV interacting with Joe Montana and the rest of the team along with the press conferences after the game with his minimal commentary. i was always impressed with his focus and demeanor during the game. He rarely lost his cool in front of the camera, he was a rock solid fixture on the sidelines. When I realized he had a book published on leadership I grabbed at the chance to read it.

The book itself was completed from interviews, various writings and lectures given over  long span of time, but it’s woven together to reflect primarily the time that Bill Walsh was in the NFL. He wasn’t always right, but the book is written with a 20/20 hindsight so Bill gets to correct his mistakes for the readers benefit. Bill gets to tell us the story of how he rose to fame, it’s true that every overnight success had a long road to walk before anyone realized he was even there. This was true for Bill so we got to see the story of how he rose to be the leader of the 49ers against all odds and despite several significant road blocks. Bill had great will power and the ability to carry out his plan before anyone with the ability to stop him realized  that they should or could. Bill was allowed time to bring his vision to fruition, and his leadership was allowed to take hold.

Bill Walsh broke the normal pattern of Iron Fist leaders and Tough Guy approaches to discipline in order to lead with a balance of respect and unwavering commitment to the goals. It’s Bill’s commitment to the end zone that is uncanny, it’s his will power to create his system and to stick with it until the end and the few times he has deviated from his system he’s regretted it. Bill had a great system in mind, it was complex and simple and grand and minute all at the same time. At least half of the books I’ve read this year have a code, a set of rules or guidelines that were adhered to strictly in a quest for success. Bill is no different, his system was well defined, clear and concise. He wrote down everything and followed through to make sure that it was explained and completed to his specifications. Follow Bill’s path, read this book and then write down your goals, but then take it a step further and really go into depth with a plan to achieve them. Once you write down your goals, share them and come up with a plan to implement and execute on them. Success doesn’t come overnight and it doesn’t come easy, it comes with a lot of hard work. The book I read introduced me to a Bill Walsh I didn’t get to see on television, it introduced me to a mad scientist who was full of fear, who had self confidence issues and dealt with constant doubting but who ultimately overcame all of that to lead with passion one of the greatest dynasties in sports history. Take a look and let me know what you think. If you do the right things, day after day, will the score really take care of itself?