This is the grand-daddy of all the self-help, think positive, motivate and just do it books! It’s hard to imagine that this was originally written in 1937. 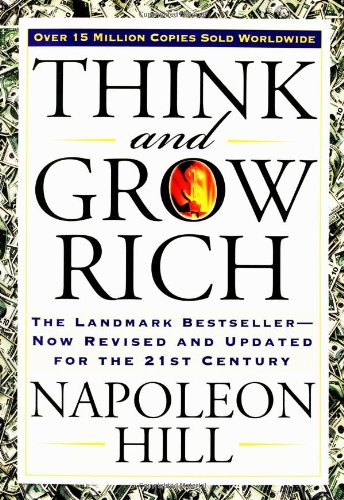 I’ve read the updated version for he 21st century so the examples are a little more up to date, but the message is unchanged from almost 80 years ago and still entirely relevant.

52 Weeks of Book Reviews. Week # 11 – Think and Grow Rich: The Landmark Bestseller – Now Revised and Updated for the 21st Century by Napoleon Hill (Author), Arthur R. Pell (Contributor)
It’s a testament to the book that as soon as I finished it I had to research Napoleon Hill. As a salesman I appreciate anything that compels me to take action. I searched the website and I actually ordered the $350 complete set of Napoleon Hill’s “Your Right to be Rich” bundle set with 10 CD’s, 4 DVD’s and the hardcover book. Seriously, I just did it!
I’ve read “The Secret”, and I’ve watched Tony Robbins along with about 100 other great motivators on youtube talking about goal setting, leadership and mindset but I’ve never been really ALL-IN on their hype. This is something different. This is well laid out, methodical and less touchy-feely in a way that makes sense. The steps are laid out in logical order, there are specific actions to take and they all have sound reasons for taking them.
I don’t believe that the Law of Attraction, Positive Vibes, Mental Vibrations or Believe it to See it type stuff works via some unseen Jedi Force. I believe that if you feel a certain way your body gives hidden tells via your tone, posture, movements and possibly even smell and that all of those things are picked up on by our subconscious to help impact our first impression or to pick up on a mood. Have you ever just had a feeling about someone or or situation? Good or bad? I don’t believe that we send messages telepathically through the ether to one another, but that doesn’t mean that swagger can’t be weighed, measured and picked up on by others. Napoleon Hill does take some time to talk about the messages that your mind and body send out, and maybe he really believed that he could send ESP messages to other people, maybe he really could. The mind is a crazy and powerful thing.
I do know that his system will work.I do know that he tapped into something and he tried his best to explain it. I do know that my explanation is just as valid as his and that it doesn’t really matter because as long as the end result is the same we’ve both gotten messages out to the world based on confidence and discipline of the mind. You probably aren’t where you want to be in the world right now. Your career, relationships and passions probably aren’t all in harmony with each other working at peak efficiency right now. You probably want to create, grow and bond in ways you don’t know how to accomplish. There are life coach systems out there for everyone and I bet that they all work if you use them in a disciplined style. The problem is that 99% of us give up. Our New Years resolutions end after 5 days and we never finished reading that 1 book we started. We meant to do that thing, or make that call or to get up earlier and start that good habit. Most of us gave up before we even started, we just thought about not giving up and thought about how awesome that would be and how happy it would make us. Then we slept in for 30 more minutes because that extra sleep made us happier via instant gratification. We exerted control and talked back to ourselves. We thought that we could sleep in if we darn well want to… but then we felt bad about it later, but only for a minute, we’ve trained ourselves to skip over that pain. We probably did that 360 days last year so we’ve had a lot of practice.
Do something today that you wont feel bad about later.  It’s not too late.